Despite Thursday evening’s program containing two of the most popular works in the repertoire, matters began with a certified rarity, a little-known work by a little-known composer: the Symphony No. 4 in C minor of Henri-Joseph Rigel. German born but transplanted to Paris, he was a contemporary of Haydn and Mozart with no less than fourteen symphonies to his name. The C minor work in question, published in a set of six that comprise the composer’s Op. 12, is one which this weekend’s conductor Bernard Labadie has championed for some time; I recall him including it on a Chicago Symphony program a few years back (reviewed by a colleague here).

Labadie imbued the opening with a nervous energy, a textbook example of Sturm und Drang, and the thematic material was sharply defined, given with an appropriate punch. The Teutonic fire was tempered by Gallic sensibilities during the central slow movement, a graceful, untroubled affair in the relative major, while the minor key intensity returned for the sprightly finale. 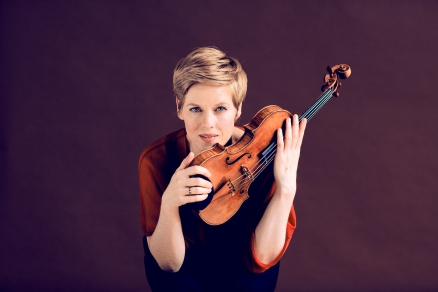 More familiar terrain was to be had in the Mendelssohn Violin Concerto which brought forth soloist Isabelle Faust. Faust took flight over the orchestra with the haunting, almost mystical theme, a rich lyricism emanating from her 1704 Stradivarius. The rapid scalar passages demonstrated her sound and confident technique (it should be remembered that this concerto was written for the legendary virtuoso Ferdinand David), while she opted for a more burnished tone in the introspective moments. At the movement’s end came a dramatic coda, while an ordinary composer would have closed here, the endless innovation of Mendelssohn’s fertile mind called for a long-breathed note in the bassoon to serve as a seamless transition to the Andante, a sublime song without words.

Further transitional material connected the finale, passionately yearning before giving way to the movement proper, spirited and celebratory. Faust received an enthusiastic and certainly well-deserved ovation – she seemed genuinely moved by it – and treated the audience to a most imaginative encore choice in Kurtág’s Doloroso, atmospheric in its unnervingly barren texture.

One could reasonably trace the Rigel symphony as a distant forebear to Mozart’s incomparable Symphony No. 40 in G minor, it also being a work of searing intensity in the minor. Labadie elected to conduct the Mozart from memory, and the fact that he remained seated at a piano bench did little to detract from the energy he offered. The work began in a whisper, almost sotto voce, with germs of themes building to great pathos, occasionally alleviated by a more lyrical secondary theme. Labadie achieved deft balance of the instrumental voices, and one was grateful that Mozart later rescored the work to include the clarinet as the pair added a lovely and mellifluous contrast.

The Andante served as a respite with the downward cascades in the winds especially charming, while the irregular syncopations of the minuet were dynamically punctuated, countered by the gentler trio (a horn flub or two notwithstanding). The brisk finale was a whirlwind of orchestral effect, one moment in the minor, the next in a joyous major, and perhaps most impressive was the sophisticated fugato, executed with a crystal-clear precision.